Move across the Green Mountains and beyond with NEHGS 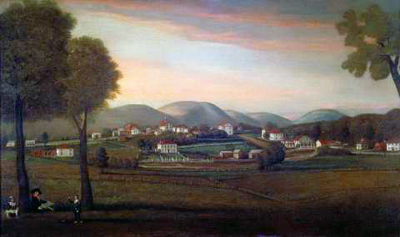 Ralph Earl's "Townscape of Bennington," 1798
Search current sketches now
Members: View a list of sketches in our database by browsing the database. Use the "Volume" menu to view and select a specific sketch.

The focus of much New England research has always been on the pre-1700 families, mostly in southern New England. The logic of it affecting more people’s ancestry makes perfect sense. NEHGS has now embarked on projects to get those researchers who are stuck outside of New England to get through the migration brick wall of western New England.

NEHGS started the Western Massachusetts Families in 1790 project with Helen Schatvet Ullmann several years ago and it has produced great results. She is identifying families moving across the Berkshires using the snapshot of the 1790 census to develop an understanding of the migration through this region. Today we announce a sister project with the same purpose covering those who traveled north of the Massachusetts border on their migration out of southern New England.

Vermont is unique in its migration history. The initial settlers laid down the political and religious fabric of the state. The end of the Revolutionary War in 1783 unlocked a floodgate of settlers to this new, open land which at the time was thought would become one of the most populated areas of the country. By 1808, settlers determined that the land was not that good for farming as they thought and flatter land with rich soil started opening up in New York and Ohio which slowed down the number of immigrants to Vermont. By 1830, the mass exodus west began. As fast as the settlers arrived in the 1780s and 1790s, they seemed to leave even faster. The vast majority of Vermont towns still have not exceeded their peak pre-1850 population.

With this project, we hope to learn who the players were on the political and religious fronts, uncover the migration patterns for this period in the region, and identify all those just looking to better their lives on the new frontier. Those included in this study project are heads of households identified in Donald Alan Smith’s thesis “Legacy of Dissent: Religion and Politics in Revolutionary Vermont 1749 to 1784” (Clark U., Ph.D., 1980), a copy can be found in the NEHGS library.

Family sketches will be based on the heads of households included in Donald Alan Smith’s work and any others that might be identified through this research as a head of household by 1784. Each sketch will be in Register format, fully and concisely documented. Sketches will include the ancestry of the head from secondary sources (if found); all vital records of the head, spouses, spouse’s spouses (if applicable), all children, all children’s spouses; citations to all published gravestones (online and printed); identifying the head in his pre-Vermont setting; finding any occupations, religious affiliation, political affiliation, military record, education, offices held in Vermont, and proprietorships (if possible); all probate records; and a survey of the Vermont State Papers, local histories, and genealogies.

Sketches will be published monthly as stand-alone articles on the NEHGS website with a detailed, searchable index. A table of contents will show the heads of household covered in the online sketches which will grow over time. Being such a massive undertaking, NEHGS members are urged to write the Society with copies of any additional primary material as the possibilities to revise and update sketches is possible. The thesis suggests that this project can include upwards of 2,500 sketches. The hope is to produce a minimum of 50 sketches per year, but likely between 100 and 120 sketches is anticipated.

The plan is to cover the earlier settlers first since their older children will likely be candidates for the later part of the project. We will use the 1771 census of Cumberland County as our first guide and add more from that base. The author is in contact with the Vermont and New York state archivists to help identify collections of records that will cover these early citizens of Vermont.

Submitted by Scott Andrew Bartley. He can be reached at VermontSettlers1784@nehgs.org.