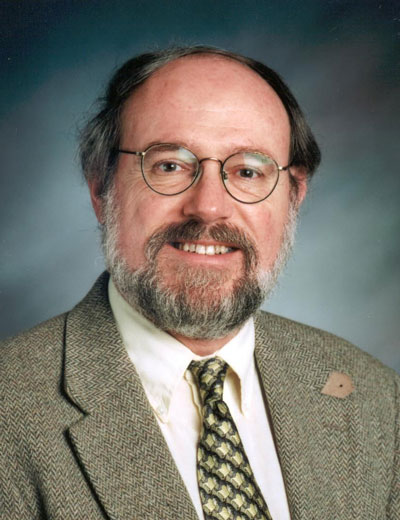 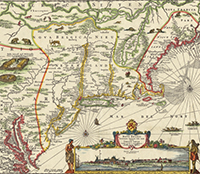 As a group, 17th-century New Englanders arguably are the most studied group on the planet, and thus descendants are blessed with a multitude of printed resources. Prior to 1700, the European population of the area was still sufficiently small and compact enough to be manageable from a genealogical standpoint. In many cases, town vital records, church, colony, court, probate, land, military, and tax records not only have survived, but have been abstracted and published. This guide is intended to direct you to the most relevant and useful resources for tracing your 17th-century New England ancestors.To learn how to bridge the Atlantic and trace your ancestry back to England, see our English Genealogy subject guide. 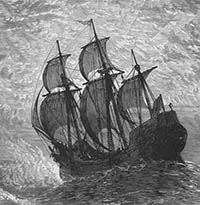 Finding aids are important first-stop references that direct you to published resources about a certain person. There are two essential finding aids for seventeenth-century New Englanders:

Torrey’s original twelve-volume manuscript (held at NEHGS) is the source of several published volumes, databases, CD-ROMs, and more. It lists approximately 38,000 actual, proven, and presumed marriages between New Englanders that occurred by 1700, including those who later settled on Long Island, New York, and New Jersey.

Arranged alphabetically by the groom’s surname, each couple’s entry includes the name of groom, with years of his birth and death (if known); name of the bride, with her years; date of marriage; place of marriage and/or place(s) of principal residence; and sources.

The sources provided are in shorthand and refer researchers to genealogies, reference volumes, articles, and more—all published prior to 1962. View a full list of Torrey’s sources. 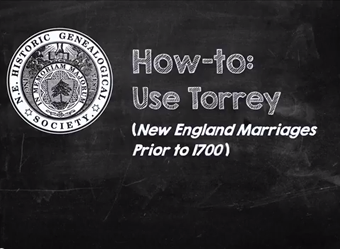 Watch a short video on how to use Torrey's New England Marriages Prior to 1700.

New Englanders in the 1600s: A Guide to Genealogical Research Published Between 1980 and 2010, Expanded Edition by Martin E. Hollick
NEHGS, 7th Floor F3 .H66 2012
This finding aid directs researchers to genealogical writing about seventeenth-century New Englanders, covering the publication years 1980 to 2010. Entries are alphabetized by surname; each entry contains enough information for you to locate the research that has been done on that particular person, and also indicates which publications mention other family members, ties to royalty, full-family genealogies, and/or DNA studies. 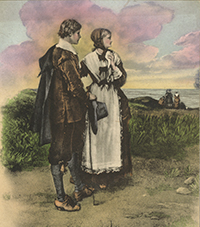 Between 1620 and 1640 about 20,000 men, women, and children crossed the Atlantic to settle New England. The New England Historic Genealogical Society’s Great Migration Study Project, under the scholarly direction of Robert Charles Anderson, FASG, aims to provide a concise, reliable summary of past research on these early immigrants. The result of this ongoing effort has been a range of authoritative volumes and a quarterly newsletter covering the earliest years of settlement, more than 2,000 in-depth genealogical and biographical entries of New England’s earliest settlers, andthe discovery of many previously unidentified immigrants. Learn more about this study project.

Volumes include (all authored by Robert Charles Anderson unless otherwise noted):

The Early New England Families Study Project picks up where The Great Migration leaves off. It aims to create accurate and concise sketches of seventeenth-century marriages between 1641 and 1700. Using Clarence Almon Torrey’s bibliographic index (above) and its recent successors as a guide, this study project will cover more than 35,000 marriages. Although “Torrey’s Marriages” is credited with indexing nearly all New England marriages in the seventeenth-century, some exceptions will be addressed in our project, including nonwhite and non-Protestant couples, as well as couples identified in the last fifty years. Sketches will be grouped by year of marriage rather than immigration. These sketches are currently being added to a searchable online database available to NEHGS members. Learn more about the Early Families of New England Study Project. 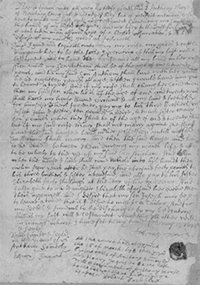 Fortunately, our early New England ancestors were avid record keepers and many documents have survived to this day. While it's impossible to enumerate all available records for each New England state here, you will get an idea of what types of records exist and where you may find them. One good starting place is on AmericanAncestors.org where members can access original records from many early New England towns. View a list of our databases by record type and/or state. Our Town Guides also offer information on each New England town, when it was established, its county, and any related databases. If you are looking for records in Massachusetts, you may also want to consult the Report on the Custody and Condition of the Public Records which lists what records existed for each parish, town, and county as of 1889 (you can borrow an e-book version from our online library catalog.

Passenger lists were not created when a ship landed in New England, rather any information about who emigrated when comes from records generated at the point of departure or is pieced together from later documents. There are a number of published record compilations that can help. Read more about seventeenth-century passenger lists.

The Planters of the Commonwealth by Charles E. Banks
NEHGS, 7th Floor Reading Rm F67 .B19 1930
Passengers to the Massachusetts Bay Colony, 1620–1640, from actual and reconstructed ship's lists.

Founders of Early American Families: Emigrants from Europe, 1607–1657 by Meredith B. Colket
NEHGS, 7th Floor Reference CS61 .C64 2002
An alphabetical listing of all known immigrants to North America by 1657 who were adult male heads of families and who left male progeny to continue the surname. Cites the best monograph and periodical sources. Despite some flaws and omissions, this is one of the single most useful reference works available.

Topographical Dictionary of 2,885 English Emigrants to New England, 1620–1650
NEHGS, 7th Floor Reading Rm and 5th Floor Stacks F3 .B35 1937
Useful, but use with caution (see in R. C. Anderson's article in The Genealogist mentioned above).

A Genealogical Dictionary of the First Settlers of New England, Showing Three Generations of Those Who Came Before May, 1692, on the Basis of Farmer’s Register, 4 vols. by James Savage
NEHGS, 5th Floor Stacks and 7th Floor Reading Rm F3 .S2 1860

Genealogical Dictionary of Maine and New Hampshire by Sybil Noyes, Charles T. Libby, and Walter Goodwin Davis
NEHGS, 7th Floor Reference F18 .N68 2012
One of the most authoritative and exhaustive works of any type. Provides many clues to further research into the pre-American ancestry of early New England settlers.

Passenger and Immigration Lists Bibliography,1538–1900, Being a Guide to Published Lists of Arrivals in the United States and Canada edited by P. William Filby
NEHGS, 7th Floor Reference CS68 .P364 1988

Our Quaker Ancestors: Finding Them in Quaker Records by Ellen T. and David A. Berry
NEHGS, Research Library E184.F89 B47 1987

Report of the Temporary Examiner of Public Records (Public Document No. 41, 1906)
NEHGS, 5th Floor Stacks CD3140 .A4 v.1906
Contains a detailed list of church and parish records, arranged alphabetically by town and then by denomination.

An Inventory of the Records of the Particular (Congregational) Churches of Massachusetts Gathered 1620–1805 by Harold Field Worthley
NEHGS, 7th Floor Reference BX7148.M4 W65 1970

Report on the Custody and Condition of the Public Records of Parishes, Towns and Counties [Massachusetts] by Carroll D. Wright
NEHGS, 7th Floor Reading Rm CD3290 .A2

The New Hampshire Churches: Comprising Histories of the Congregational and Presbyterian Churches in the State, With Notices of Other Denominations by Robert F. Lawrence
NEHGS, Rare Book Collection F33 .L38 1856

General Court in early New England engaged in a wide variety of cases including land disputes, debt, divorce, theft, and even witchcraft.

A Volume Relating to the Early History of Boston Containing the Aspinwall Notarial Records from 1644 to 1651 (vol. 32 of Boston Record Commissioners)
NEHGS, 5th Floor Stacks F73.1 B74 v.32 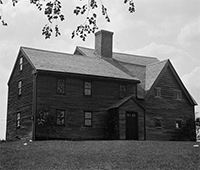 Town records for the earliest New England settlements begin in 1633 and vary from town to town. They may contain council minutes, lists of town officer's, tax and assessor records, licenses, poor records, and more. Such records for a number of key Massachusetts towns have been published:

Boston: “Boston Town Records,” in Second Report of the Record Commissioners of the City of Boston; containing the Boston Records, 1634–1660, and the Book of Possessions, 3rd ed.
NEHGS, 5th Floor Stacks and Microtext Floor Reference F73.1 .B74

Dorchester: Fourth Report of the Record Commissioners of the City of Boston. 1880. Dorchester Town Records

Most New England towns began recording births, marriages, and deaths soon after settlement. Many of these original records still exist to this day--too many to list here. Several of these volumes of records have been transcribed and indexed and are searchable on our website. View a list of our databases by record type.

A digest of the early Connecticut probate records, 3 vols. by Charles William Manwaring
NEHGS, 5th Floor Stacks, F93 .M29 1904; also available to NEHGS members as an online database at AmericanAncestors.org.
Includes probates for the Hartford District from 1635 to 1750.

Index to the probate records of the county of Middlesex, Massachusetts by Samuel Hilliard Folsom
NEHGS, Microtext Floor Reference F72.M7 M55; available to NEHGS members as an online database at AmericanAncestors.org.
Covers the years 1649 to 1871.

Index to the probate records of the County of Suffolk, Massachusetts: from the year 1636 to and including the year 1893, 3 vols.
NEHGS, Microtext Floor Reference F72.S9 M45 1895

Suffolk County Wills: Abstracts of the Earliest Wills Upon Record in the County of Suffolk, Massachusetts: From The New England Historical and Genealogical Register
NEHGS, 7th Floor Reference F72.S9 S88 1984
Covers the years 1639 to ca. 1670.

Index to the probate records of the Municipal Court of the City of Providence, Rhode Island. From 1646 to and Including the Year 1899
NEHGS, 7th Floor Refereice F89.P9 P88 1902; also available to NEHGS members as an online database at AmericanAncestors.org.

The History of New England from 1630 to 1649 by John Wintrhop, 2 vols. edited by James Savage
NEHGS, 5th Floor Stacks and Rare Book Collection F67 .W79 1853
This edition is preferred due to its useful annotations. 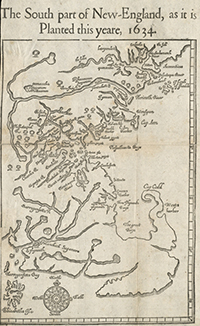 The New England Historical and Genealogical Register (1847– )
Available to NEHGS members as an online database on AmericanAncestors.org.
The oldest, most voluminous, and most respected journal dealing with New England genealogy. Some of the finest medieval English genealogical scholarship has appeared within its covers. Hundreds of Register articles dealing with English origins have been compiled in English Origins of New England Families, from the NEHGR edited by Gary Boyd Roberts ( first series; second series).

The Mayflower Descendant (1899– )
NEHGS, 7th Floor Reference F68 .M46
Available to NEHGS members as an online database on AmericanAncestors.org.
An essential source of information for many New England families, not just those with Mayflower lineage. The journal includes transcriptions and abstracts of deeds, wills, vital records, and other original documents. In addition, it features compiled genealogies and analytical studies of genealogical problems.

The American Genealogist (1922– )
NEHGS, 7th Floor Reading Rm F104.N6 A6
Available to NEHGS members as an online database on AmericanAncestors.org
This journal has a well-deserved reputation of having the highest critical standards and features short articles of the problem-solving type. Has published dozens of European-origins articles. A subject index to vols. 1–60 makes it especially useful.

The National Genealogical Society Quarterly (1912– )
NEHGS, 1st Floor Rotunda CS42 .N4
Concentrates on the Mid-Atlantic states. Since 1971 it has published “Genealogical Gleanings in England” by Peter Wilson Coldham, based on research in the Public Record Office, London.

Want to maximize your research? The experts at NEHGS can help! We offer a number of services that can help you break down brick walls and expand your research.

Meet one-on-one with our genealogists

Want research guidance from a professional genealogist? Our experts provide 30-minute to two-hour consultations in person or by phone.

Hire our experts in Research Services

Whether you are just beginning your family research or have been researching for years, NEHGS Research Services is here to assist you. Our team of experts can: